The Timeline of Silappadhikaram and the date of Madurai burning 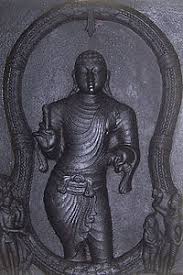 The Tamil Epic Silappadhikaram is a very important literary work as it provides an overview of the ancient Tamil society under the three major kingdoms, Cheras, Cholas and Pandyas. It does so by brilliantly interweaving the story of a merchant couple, Kovalan and Kannagi in the form of a dance drama. For the uninitiated, a brief outline of the story is given below & others can skip a para :)

The story starts with the marriage of Kovalan, son of a wealthy businessman in the Chola country, with Kannagi who hails from another wealthy merchant family. They start their life in the port city of Poompuhar. However, their marriage runs into trouble as Kovalan was attracted by a dancer named Madhavi.  Even that relationship didn’t last longer. Kovalan and Madhavi separate after a brief period of 'living together'.  Kovalan comes back and starts living with Kannagi again.  Subsequently, both of them travel to Madurai in Pandya country to start a new life. Unfortunately, Kovalan gets executed in Madurai for a crime he didn’t commit. Enraged by this, Kannagi challenges the Pandya King Nedunchezhiyan and proves that her husband is innocent. Felt by remorse as he had wronged Kovalan & erred in judgement, the King dies instantaneously and so was his wife Kopperundevi. Kannagi’s anger didn’t subside as she sets the entire city on fire. Now it is her turn to feel sorry after seeing the sufferings of the common citizens due to the raging fire. The presiding deity of Madurai, Meenakshi appears before Kannagi and pacifies her. The Goddess tells Kannagi that it was predetermined that on that particular day Madurai would be set on fire and the kingdom will collapse. Kannagi then leaves for Chera country and goes to heaven thereafter. Chera King Chenguttuvan hears this story through the hunters. He wanted to build a temple for Kannagi. He goes to north India, defeats the kings ruling there and brings a holy stone for the Kannagi temple. Many kings participate in the consecration ceremony of the temple. The story ends with Chenguttuvan performing Rajasuya Yagna.

The timeline of the epic is a debatable topic among Tamil scholars and historians. It needs to be emphasised here that there is a distinction between the timeline of the events as described in Sillappadhikaram and the date of the work itself.  It is generally agreed that the epic was written in the post Sangam period, which is 3-5 century CE. However, the kings mentioned in the epic were from the Sangam period. The theory of Ilango being the brother of Chera King Chenguttuvan was disproved by many scholars. So it can be clearly said that the story was written sometime during the 3rd century but the events in the story happened earlier. In terms of the actual story line, numerous dates were attributed to it. However  there are three distinct time periods emerge, which are linked to the date of the epic by most researchers.

Few historians attribute a date of 3rd Century BCE to the epic. This theory has quite a few flaws. Silappadhikaram talks about three great kings of the Sangam era, Chola Karikalan, Pandya Nedunchezhiyan and Chera Cheguttuvan. The ‘Arangetru Kathai’ Chapter of Silappadhikaram praises Karikalan as the one who went to the Himalays and carved the Chola Symbol, Tiger, in the great mountain. It also mentions that he defeated few northern kings on this mission. Pandyan Nedunchezhiyan who is mentioned in the Madurai Kandam (Canto) of the epic was a great ruler praised by many Sangam era poets. He was known as  ‘Ariya Padai kadantha’, one who defeated the army of Arya kings. Then comes Chera Chenguttuvan who goes on a northern trip to bring the sacred stone and in the process defeats few northern kings as well. In effect, there seem to be three major expeditions to the north undertaken by these three Tamil kings in succession.

The third century BCE was the initial period of the third Tamil Sangam. While the Sangam period poet Mamulanar sings about an invasion by the Mauryas from the north, there is no mention of a Tamil king going on a northern expedition during this time. Further, it is evident that the Maurya expedition from the north as mentioned in the sangam literature happened during Bindusara’s time. His son Ashoka’s inscriptions describe the Tamil Kings as ‘friendly neighbours’.  Hence, it can be concluded that the abovementioned three northern expeditions could not have happened during this period, against a strong Maurya dynasty which was ruling in the north.

Apart from this, the Tamil Chronology of the kings too didn’t support this theory as Karikalan & Chenguttuvan said to belong to a later date. Hence, it can be safely concluded that the Silappadhikaram happened at a later date than the 3rd Century BCE.

On the other hand, Diwan Bahadur Samikkanu Pillai states that Silappadhikaram happened during 756 CE citing an astronomical note in the epic. While it may be the case that the planetary position was in sync with what was mentioned in Silappadhikaram during 756 CE, it needs to be corroborated with other historical facts as well. The 8th century TN history was relatively well documented. The Pallavas were ruling the north of TN, while the Medieval Pandays were ruling the south. Medieval Pandya chronology was well established by their copper plates and inscriptions. There is no record of a king ‘Nedunchezhian" or burning of Madurai during this period.

This was also the time when the Bhakthi Movement in Tamil Nadu was at its peak, with Nayanmars (Saiva saints) and Azhwars (Vaishnava saints) ushering in the rejuvenation of Hinduism in Tamil Nadu. During the Silappadhikaram period, Sramana religion and Buddhism were prominent, as evidenced by the passages in Sillappadhikaram and its sequel literary work, Manimegalai. Silappadhikaram didn't mention anything about Pallavas who were powerful during the 8th century. Hence, this theory cannot be corroborated with other contemporary historical records which are well documented.

This brings us to the third & more plausible historical timeline block which many scholars attribute to this epic, the second century CE. This is the last century of the Sangam period where powerful Tamil kings ruled the land. This is also the period when the Mauriyan empire declined and north India was ruled by a number of kingdoms. So in all probability the successive missions mentioned in the Tamil literature were only plausible during this time. The Tamil kings' chronology was also in support of this time period. Further, Silappadhikaram mentions that the Srilankan King Gayavahu (Gajabhahu) was one of the participants during the consecration ceremony of Kannagi temple,

The verse clearly states that Gayavahu who ruled the Sri Lanka, came for this ceremony. The Gayavahu referenced here is said to be Gajabahu I who ruled Sri Lanka between 114 CE to 135 CE according to Mahavamsam. Sri Lankan historical records also state that Gajabahu returned to Sri Lanka with the anklet  of ‘Paththini Deivam’,  the noble woman, an obvious reference to Kannagi.

It is well known that the Satakarni was the name(s) of the Satavahana kings who ruled central India during late second century BCE to 3rd Century CE. There are few kings with the name Satakarni who ruled during the 2nd century CE. This is another piece of corroborative evidence that the epic indeed happened during the 2nd century CE. This also enhances the possibility of Ilango Adigal, who lived about a century later, writing a great literary masterpiece based on the incidents that happened a few decades back.

Based on the above timeline, I have started searching the software Jaggantha Hora to see if the astronomical note as given in the epic (which was also used by Diwan Bahadur Samikkanu Pillai) has a matching year in the 2nd century. Now, what exactly was mentioned in the note ?

The above verse comes in Katturai Kathai. Through this verse, Goddess Meenakshi tells Kannagi that all these events were predetermined, that Madurai will be burnt & kingdom will fall on a particular day. That day mentioned here is Adi Thingal (Kataka Month), Per Irul Pakkam (Krishna Paksha), Azhal Ser Kuttathu (The First leg of Krithika Nakshatra), Velli Varathu (Friday). So in effect, this happened during the Kataka month as per the solar calendar, on a Krishna Paksha, with the first leg of Krithika Nakshatra falling on a Friday. So i went and searched for this combination during 2nd Century. With Sun in Kataka Rasi during Adi month, the Krishna Ashtami was mostly falling on Revathi and Ashwini Nakshatra and sometimes on Bharani. Ashtami with Krithika seem to be a very rare combination. During June 19, 116 Ashtami fell on a Friday but that was a day of Revathi star. 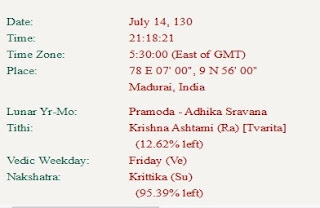 With few such iterations, i could zero in on July 14th, 130 on which this rare combination happened. It was a Krishna Ashtami on Friday during the Adi month (Sun in Kataka). The star with Krithika in its first leg during the night. At that time the city of Madurai was set on fire by Kannagi. This falls exactly in line with Gajabahu’s reign, which is documented in Sri Lankan history. This also has corroboration with other evidence, such as the Satavahana rulers mentioned above.

While there may be further research required to look at other astronomical events in the epic which can support this date, it is quite clear from the evidence available that the epic indeed happened during the 2nd century and the date on which Madurai was set on fire, July 14th - 130 CE.